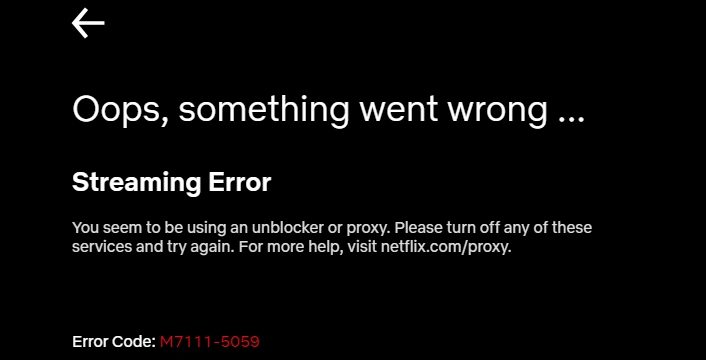 The Netflix proxy error appears on the screen of many users who try to bypass the Netflix geoblocks and get access to media libraries from other countries. It is a stressful event that prevents you from enjoying the newest and most popular titles streamed by the video-on-demand service.

But there are workarounds when using VPN services. Before finding out the solutions to evading Netflix geofencing, let us take a closer look at the proxy error to find out how it works, what triggers it, and why it happens in the first place. Then you can check out our top three VPN recommendations that will make your life easier.

What is the Netflix proxy error?

A Netflix proxy error occurs whenever you are trying to view movies and TV shows on Netflix using an unblocker, like a proxy server or VPN service. The screen becomes black, and you receive a message starting with “Oops, something went wrong,” accompanied by error code M7111-5059. At this point, you are locked out and unable to access the desired content.

The way that Netflix is capable of detecting unblocking tools is unclear. Understandably, the company would not release this information to the public since it could be used by hackers to find new ways to circumvent the geoblocks.

But there are two known methods for identifying unblockers: IP filtering and DNS filtering. Video-on-demand services like BBC iPlayer, Hulu and HBO Now utilize these techniques to flush out rogue users, so it is safe to assume that Netflix does it, too.

ISPs assign unique IP addresses to every device that connects to the Internet. In addition to having an alphanumerical format, IP addresses can be used to trace you because they contain useful information about your device, including location (map coordinates), device name and type, and ISP name.

Therefore, you inadvertently expose your position every time you go online. However, you can turn to proxy servers or VPN services to protect your privacy by hiding your IP address. It is what sites like Netflix are trying to detect and block because fake IP addresses do not meet their terms of service.

IP addresses can be filtered by country using a blacklist or whitelist. A blacklist means that Netflix allows access to all IP addresses, except the ones on the list. A whitelist works the other way around: only IP addresses from the list are permitted, while the rest are forbidden. Because it has a broader spectrum of region-based media libraries compared to other similar sites, Netflix probably works with IP blacklists.

DNS servers are responsible for associating the domain names you type in the web browser with the correct IP address of the site you wish to visit. Just like the case of IP addresses, your ISP is in charge of configuring your DNS settings.

But this inherited configuration may not be adequately optimized when it comes to security and speed (depending on the ISP). It is why many Internet users turn to free custom DNS servers, such as Google Public DNS, OpenDNS and Cloudfare.

A custom DNS server (like Smart DNS) can also be used to bypass geoblocking restrictions set by Netflix: it does not change your IP address but the location associated with your IP (to a country approved by the site). If you are using custom DNS with mismatched info when connecting to the video service, Netflix might be able to spot and block it, especially when using mobile instead of browser versions.

Most video-on-demand services are exclusive to one or two regions, like how BBC iPlayer is to the UK or how Hulu is to the US. Netflix is available to not only the US, where it is based, but also to more than 190 regions from all over the world. It is a remarkable feat because Netflix is currently the only video-on-demand service with such a wide assortment of audience.

People started using VPNs and proxies to gain access to the US library even before Netflix became open to the rest of the world. The practice continued after the global release because the US library has the newest, most extensive and most popular titles when it comes to movies, TV series, documentaries, and other content.

Unfortunately, the company is not allowed to publish the same titles to all worldwide users. It is because each region has particular rules regarding licensing content that cannot be overwritten by any website. Therefore, Netflix is obligated to enforce and maintain geo-based content licensing.

A part of this obligation is to prevent rogue users from viewing content they are not permitted to see because they live in a different country. Subsequently, the site blocks anyone using unblockers, showing the Netflix proxy error on a black screen.

The issue is that the company does not tell the difference between users resorting to VPNs and proxies to evade geofences from the ones utilizing these services to connect to the workplace or to protect their privacy. Even if you have legitimate reasons, Netflix recommends disabling the VPN or proxy while watching streaming content.

How to bypass the Netflix proxy error with VPN

You should never put your faith in free VPN providers. They use public servers that already exist in the Netflix databases, so they will be automatically blocked. Additionally, free VPN services are notorious for malicious activities, like collecting and selling your data to marketing companies.

Paid VPN applications are superior to free VPNs in every way. A team of security experts is in charge of maintaining the servers, discovering Netflix blocks immediately, and finding new servers out of the reach of the video-on-demand service. Moreover, the VPN provider does not sell your logs.

For more information, check out this comparison guide: Free VPN vs Paid VPN

How to use a VPN service to unblock Netflix

Netflix successfully blocks some paid VPN services, so not all of them work for circumventing the Netflix proxy error. Other virtual private network tools might not be optimized to handle the resource-consuming task of streaming websites, leading to slowdowns, interruptions, buffering, and other hiccups.

Therefore, picking a VPN application that works well with Netflix might be challenging. If you need assistance with going in the right direction, here are our top three VPN recommendations to help you get around the Netflix proxy error. They happen to be the top-ranked VPNs on our website:

It is not possible to determine the number of US IP addresses that work with Netflix because ExpressVPN does not keep track of them and because the IPs are always changing. However, all US servers worked with Netflix during our tests, except for Kansas City, Phoenix, New Jersey 2, and Santa Monica.

Further, the desktop clients for Windows and macOS feature a speed testing tool. It can be used to evaluate the downloading speed and latency of any VPN server. Then, you can opt for the fastest VPN server for Netflix, based on the speed index.

You can also enable split tunneling, DNS and IP leak protection, kill switch, and an option to optimize Windows networking to maximize VPN speed. No logs are stored about your activity. Also, the ExpressVPN team encourages you to get in touch with their help support via live chat if you encounter the Netflix proxy error.

You can subscribe to the ExpressVPN service from here as well as check out our ExpressVPN review.

At the time of this article, there were 2256 operational servers spread across 20 US regions. We did not test all of them with Netflix, but we tested multiple servers from each region and have not stumbled upon the Netflix streaming error. In addition to the US, NordVPN has servers optimized for the UK, Canada, Japan, Germany, France, and Italy Netflix libraries.

The application has proprietary DNS. It automatically switches if you try to watch Netflix while being connected to an invalid server. When this happens, the NordVPN DNS servers redirect you to the US library of Netflix. But all other VPN traffic remains routed through the selected server (not the US).

Besides the fact that it does not store logs, the tool has a kill switch, obfuscated servers to conceal your VPN traffic, along with IP and DNS leak protection.

You can subscribe to the NordVPN service from here as well as check out our NordVPN review.

CyberGhost VPN has specialized servers for Netflix, which can be found in the “For Streaming” category. However, if you connect to a US server for Netflix, CyberGhost VPN automatically matches you to an IP address. It is not possible to pick a state, so we cannot accurately determine how many US servers work with Netflix.

During testing, we got matched to three regions (Chicago, Miami, Atlanta) while repeatedly connecting and disconnecting in attempts to discover new areas. Netflix did not work at all when trying to connect to a US server that was not in the “For Streaming” category.

In addition to US Netflix, the client has optimized servers for the French and German libraries. It also works with the UK library but only if you signed up for a Netflix account using a UK IP address.

Although it has a proprietary DNS server for the USA, it did not work with Netflix in our tests. On the other hand, CyberGhost VPN features DNS and IP leak protection, kill switch, and split tunneling. Moreover, the provider does not collect and save logs about your activity.

If you are already using premium VPN and still get the Netflix proxy error or experience drops in video quality, here are some workarounds that you can try out:

Netflix will continue to block VPN and proxy users until it finds a way to provide a global media library with the same titles to everyone, without filtering access by country. Until that happens, you can resort to excellent VPN services to get around the Netflix proxy error and enjoy online streaming without restrictions.